Bear with me for the next couple of months as some changes are coming! New packaging, a new website and some new single origin bars are in the works! As the website will be under construction (likely for the whole summer), your best source of information is to email me directly takeafancy@gmail.com or stop by and see me in person at the farmers market (schedule on the side bar of this blog). Important updates will be featured here and as usual "chocolate of the week" features will be listed on the side bar as well. This week, I am super excited to release the Limited Edition Mastatal Bar ~ made with beans I picked up from a small farm in Costa Rica this month. If you haven't had a chance yet, you can read about the trip in the last few blog posts here!
***please note that the Kitsilano Farmers Market has been temporarily relocated to Riley Park (Clever you! No, that's not in fact in Kitsilano - I'm just as confused as you are!). We expect to move back to the original location June 14th. In the meantime, please find us at Riley Park on Sundays from 10-2!


Posted by Becks The Fancy Chocolatier at 2:10 PM 1 comment:

Our final stop - La Iguana Chocolate in Mastatal!
Setting off from Quepos, we had breathtaking drive up and down a bumpy gravel road with spectacular views. A few hours later, we pulled up to the chocolate shop/garden/house and we knew we were in paradise. 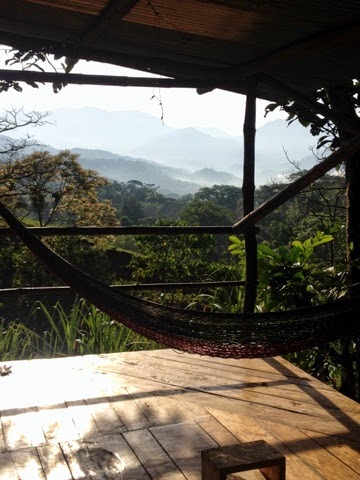 Before unloading our bags, Lidia sat us down to a cup of cacao tea and chocolate/nib cookies. The 2 day chocolate marathon had begun! Cacao grower and chocolatier Jorge joined us to talk about the history of growing cacao in Mastatal and we happily chatted about chocolate (and ate chocolate) into the evening. 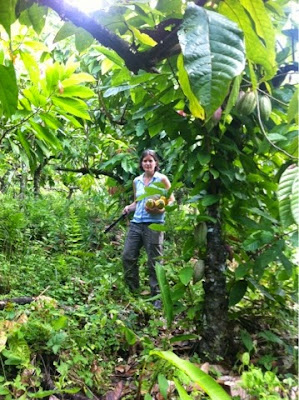 The next morning we set off early to head to the cacao orchard. They normally harvest on a Tuesday (only once a week, due to the 45 min walk to get there), but on account of our visit they decided to harvest a day early. In the slightly cooler hours of the morning we felt felt energetic and keen to help with the harvest!
We criss crossed the orchard looking for ripe pods. Because they only come up here once a week, they need to make sure they collect pods that are getting close to fully ripe as well, otherwise the next week they may find the squirrels have helped themselves to the harvest. Ripe and nearly ripe pods we cut down and put in our sacks. 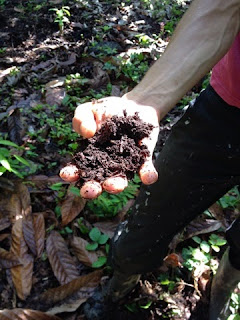 Jorge stopped from time to time to tell us about various plants and soil management. 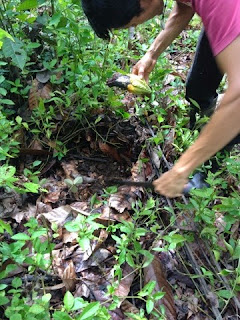 We talked about the importance of orchard maintenance for controlling moniliasis. Any infected pods we came across needed to be buried in the soil so that they could decompose and not spread the spores to other pods. 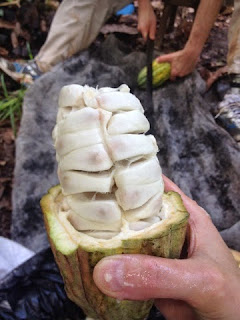 When our sacks were full we returned to the lower part of the orchard. Jorge went back to collect more pods and check on the rest of the trees. He left us to cut open the pods and separate the seeds. 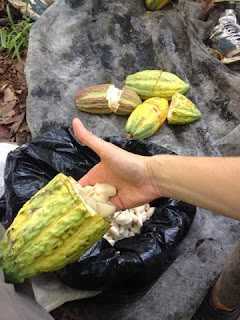 It was great, gooey fun! 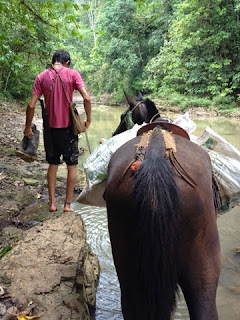 After we had finished up all the pods, the sacks were loaded up on "Blue-Blue" and we started the journey back to the house... 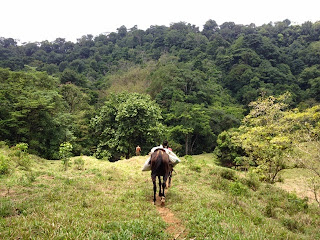 Our morning eagerness waned in the afternoon heat, but we did our best to keep up with Jorge and Juan Luis.

Once back at the house, we put the beans in the fermenting box.
Then Lidia gave us some juice to rehydrate ourselves!
After a restorative lunch, we were lucky to have a tropical downpour, which lasted over an hour and gave us an excuse to rest and regain our energy. 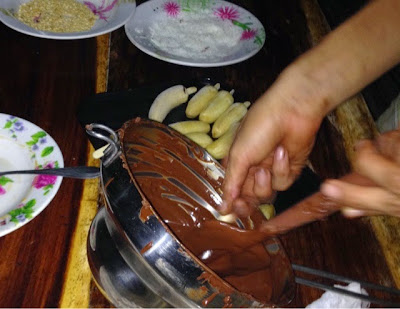 Motivation was further boosted by an abundant consumption of chocolate!
We spent the rest of the day in the kitchen making, eating and chatting chocolate and           wondering why we would ever want to leave... 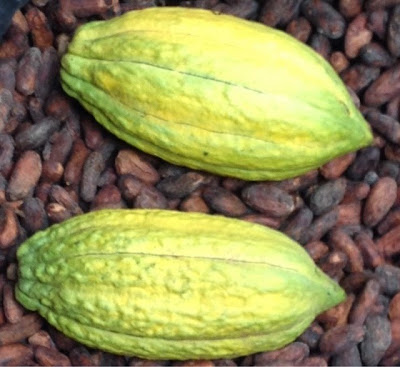 Muchas gracias to Jorge, Vicki, Lidia and Juan Luis for sharing
their beautiful home and amazing chocolate with us!

I'm happy to say, that they also shared with me some of their incredible cacao beans. Coming soon...limited edition "Costa Rica - Mastatal" bars!


Posted by Becks The Fancy Chocolatier at 6:51 PM No comments:

We started our morning early and headed to the Quepos Farmers Market... 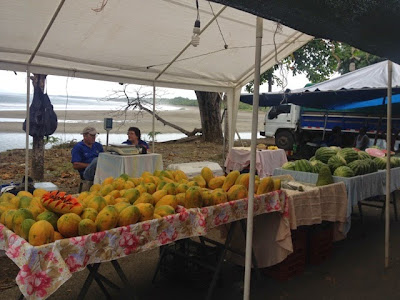 ...all stocked up on papayas, guanabana and passion fruit, we drove out on the gravel road to the Villa Vanilla plantation. There they grow organic and biodynamic vanilla and other spices and even some rather impressive cacao beans. Henry, the owner greeted us. Knowing my keen interest in cacao, he showed us first a small batch of beans they had fermenting in a box. 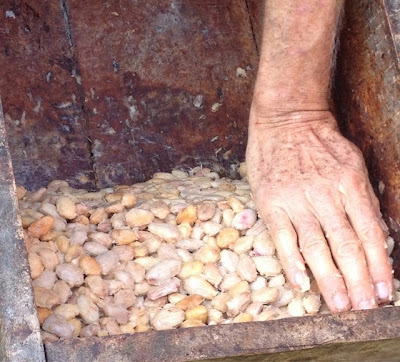 After chatting chocolate for a bit, we were introduced to Roy, a highschool student who does tours at Villa Vanilla as his "summer job". Roy gave us an overview of vanilla growing, harvesting and fermenting and then showed us how they harvest ceylon cinnamon... 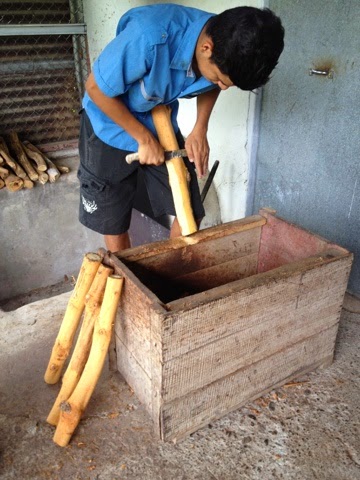 We tasted some of the fresh cinnamon bark - delicious! 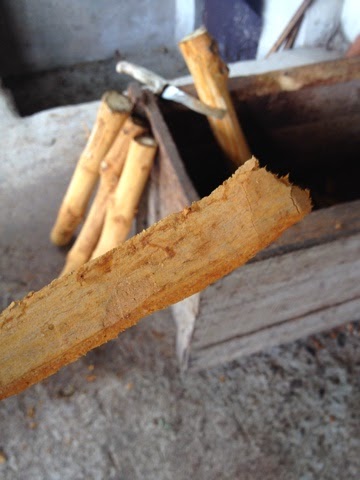 Yesterday was a particularly rainy day (like Vancouver rainy, except warm!), so they had to move their sun drying cinnamon bark and cacao bean indoors on the drying racks. 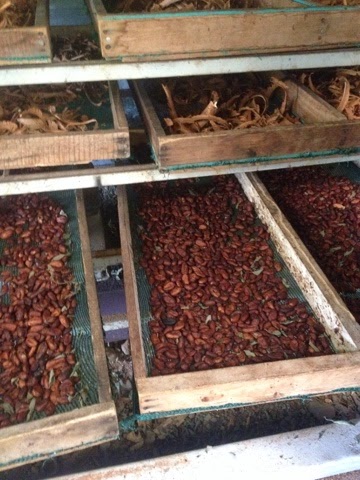 Afterwards, Roy took us to see the growing in action. Here they grow all kinds of plants in biodiverse harmony including cinnamon, allspice, cloves, peppercorn, cacao, basil, turmeric, ginger, oregano, starfruit and of course their main crop... 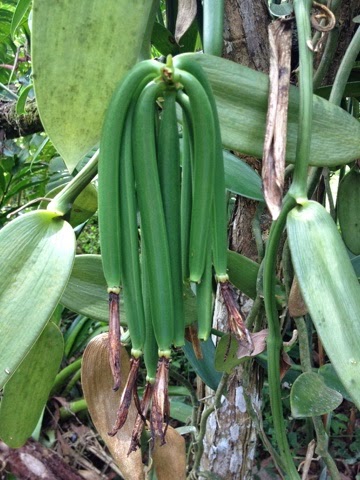 Posted by Becks The Fancy Chocolatier at 3:52 PM 1 comment:

We left Turrialba and headed southwest to the Caribbean coast, close to Panama. Thoughts were to travel into the Talamanca mountains to talk chocolate with indigenous growers. Unfortunately, we ran out of time to make the trip there and back by boat...perhaps on a return trip? We visted instead a Bri Bri family near to Cahuita, to see their cacao traditions and how they make chocolate. They are unable to grow their own cacao now, because their farm is infected with moniliasis (see my last post). They buy some beans from other farmers, so we were able to sample some beans with them and chat a bit about the local growers. 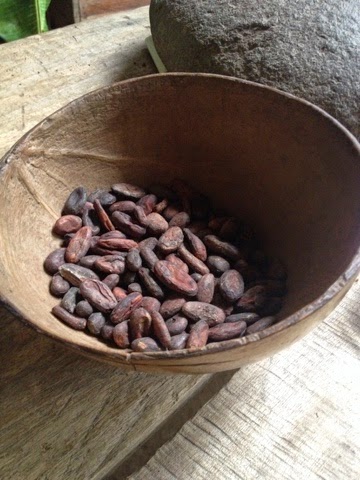 Our next stop, up the coast was Tortuguero! There are no cacao growers in Tortuguero, we just came for the monkey business. A couple of days to canoe and spot as many sloths, monkeys and crocodiles as possible! But much to my delight, right after we saw this guy... 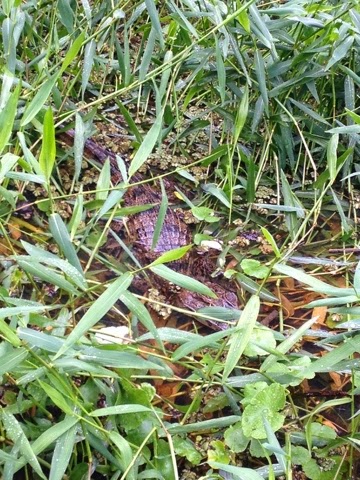 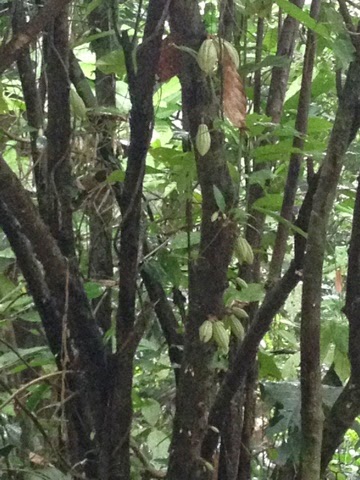 ...wild cacao! We left the cacao to the monkeys and are headed next to the Pacific coast.
Posted by Becks The Fancy Chocolatier at 4:33 PM 1 comment:

We had the pleasure today of meeting with Dr Wilbert Phillips-Mora, head of the cacao improvement program at CATIE. CATIE established an international cocoa collection over 70 years ago. At present they have over 1000 varieties of cacao at the centre in Turrialba.
Dr Phillips-Mora guided us through the important work they are doing in breeding new cacao varieties in order to  improve growing stability for farmers.
Have you ever heard of frosty pod rot? I hear “rot” and get an ominous feeling.  Frosty pod rot, otherwise known as moniliasis began destroying cacao trees in Costa Rica in 1978. As an airborne fungus, it spreads easily from farm to farm and has resulted in many growers in the region abandoning cacao for more reliable crops. Moniliasis has had a devastating affect on cacao crops in many countries including: Mexico, Peru, Belize, Columbia, Ecuador, El Salvador, Guatemala, Honduras, Nicaragua, Panama and Venezuela.  Certainly, if this disease ever reached west Africa (where most of the world’s cacao is grown) it would have catastrophic consequences for chocolate consumers worldwide.
Frosty pod rot, along with black pod (which is found worldwide) have been the main concern of cacao researchers at CATIE for the past 30 years.  Through decades  of  careful and frequent evaluation of disease resistance and yield potential CATIE have now released 6 new varieties in Central America. The hope is that farmers will gain confidence in growing this crop and cacao will flourish once again in this region.
Hmmm….
Disease control and yield, but what about quality and flavour? I feel a sudden panic, thinking of the grocery store rows of bland fruits and vegetables, brought to us by agriculture improvement research. Is this the future of mesoamerican cacao? Will we forever only know cocoa as an ingredient in a sugary candy bar, and confine the exquisite “food of the gods” to a page in history?
Thankfully, I’m assured that quality has been an integral part of the breeding research. Dr Phillips-Mora believes in the importance of promoting the exceptional quality of Central American cacao. So, only varieties with fine flavour potential were considered. In fact, 2 of the 6 varieties selected were ranked among the 10 best varieties at the 2009 Salon du Chocolat competition in Paris.
At CATIE the research continues and better varieties will be released as time goes on. The superior quality of CATIE’s developed varieties coupled with the influence of unique terroir characteristics are hoped to provide chocolate makers with an impressive variety of cacao  and in turn improve the earning potential for producing families.

Thanks to Dr Wilbert Phillips-Mora and the cacao team at CATIE for taking the time to meet with this small chocolate maker from Canada. Muchas gracias! 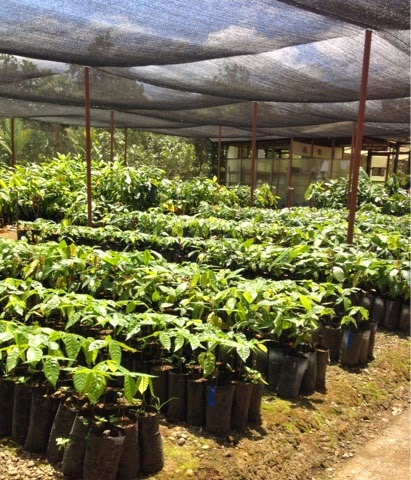 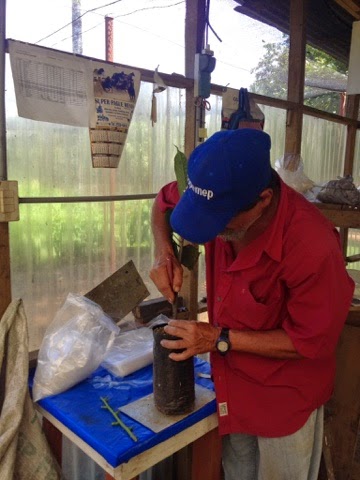 Posted by Becks The Fancy Chocolatier at 3:42 PM No comments: 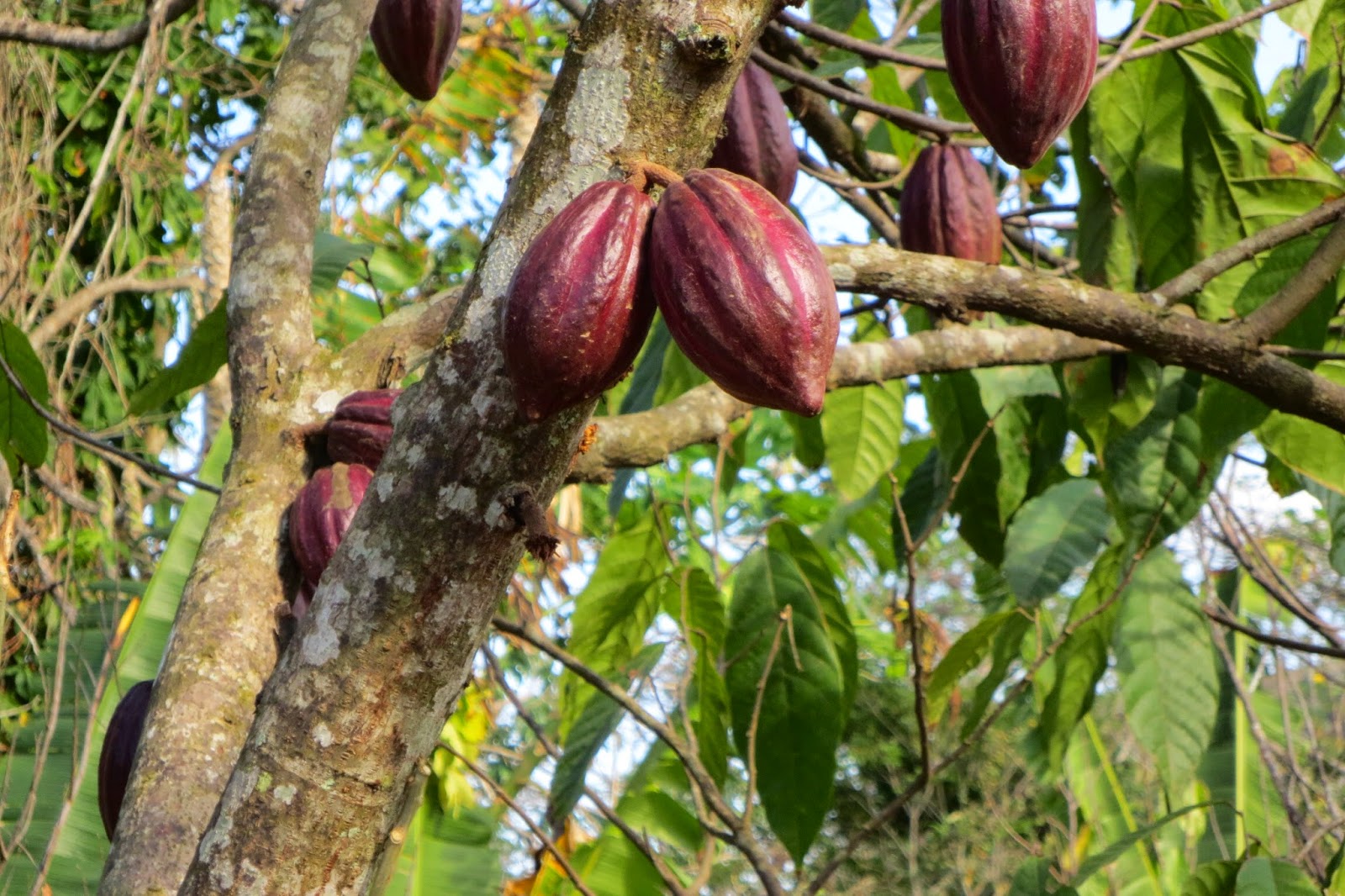 Chadwick and I are heading to Costa Rica for the next two weeks! Wifi pending, I will be posting updates of our cacao adventures here, so you can be a stowaway in our virtual suitcase 😉
Alas, I do hope you have stocked up on your favourite bean-to-bar chocolate, because the online store will be closed until we return. If you are feeling a bit peckish however, you can always stop by Greenhorn Espresso Bar in the west end for a gooey pecan or fleur de del caramel.
Next market day for us will be May 9th - I'll be at Trout Lake and Chad will run the show at Stone Soup. Onwards to sunshine and happy adventures!


Posted by Becks The Fancy Chocolatier at 3:14 PM No comments:

Honey Bunnies are back! 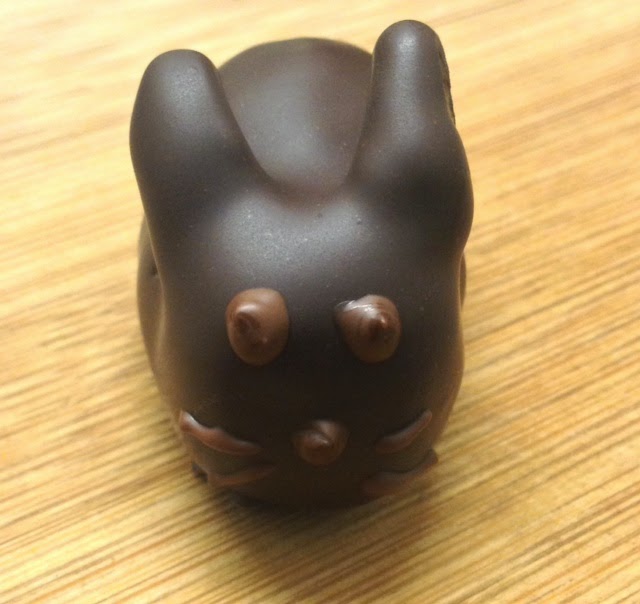 Dark Chocolate with honey centres, dipped in dark or milk chocolate with sweet orange essence! Available only at the farmers markets until April 4th!
Posted by Becks The Fancy Chocolatier at 3:10 PM 1 comment:

Check out our catalog and order online at www.takeafancy.ca

For more information please email me at:
takeafancy@gmail.com

Chocolate of the Week

This weeks featured chocolate is...
Tropical Heat - with chillies from Good Time Farming, Lemongrass and toasted coconut.
Available at Kitsilano this week!